The Federation of Eagleia Act was an Imperial Act of the Congress of Eagleia to abolish the unfair empire and unequal union and set up a united, fair and free Federation. This issue developed slowly and finally ended with talks with the governments of Eagleia and Congress and a Royal Commission into the issue. The Act was finally passed on 14th June 2009 and given Royal assent by The Queen personally to take effect the following day.

The Act, mainly about full Eagleian Federation, took effect on several other institutions as well. Imperial Acts are amendments and changes to the Constitution and therefore required a referendum to the people requiring a supermajority of approval, which was obtained, as well as requiring full agreement of both the Lords and Representatives in Congress, which too was obtained, finally it required, being a big change to the Constitution, Royal Assent from the Queen personally.

Not only did the Act form a full Eagleian Federation. It made changes to other institutions as well. For example it changed the name of the office of the Head of Her Majesty's Government from Chancellor to Prime Minister.

(The following is the content of the Act itself:) 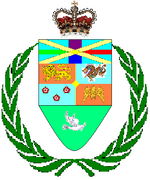 ELIZABETH THE SECOND By the Grace of Heaven, of Eagleia and Her Other Realms and Territories QUEEN, Head of the Commonwealth, Defender of our Faiths-

Proclaims this Imperial Act titled 'The Federation of Eagleia' into law-

TO WHOM IT MAY CONCERN:

AND form a free, united, equal and great Federation-

WITH all values the People of Eagleia hold close to their hearts.

THEREFORE The Queen's Most Excellent Majesty, by the will of Her people and the requests of Her Congress and Her Governments of the Union and Empire of Eagleia

DECLARES a Eagleia a Federation.

The Federation of Eagleia was announced officially to the public in a historical way, following the way the Confederation of Canada was announced to it's people in 1867, Eagleia used proclaimation posters with similar wordings, most read:

WHEREAS the Provinces [Now called States] of Goldentine, Northia, Einea, Sunnia and several Territories have decided to unite into one indissoluble Federation under the Crown and Constitution.

THEREFORE consider that by Her Majesty's Command through Imperial Act it has been done.

Celebrations were held across Eagleia on the Day of Federation.

Community content is available under CC-BY-SA unless otherwise noted.
Advertisement